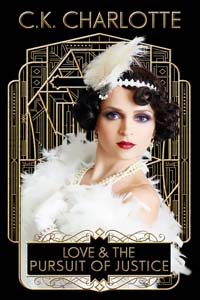 Love and the Pursuit of Justice
Book #2 in the Love and Pursuit Series
August, 2016
Amazon   iTunes   Nook   Google   Kobo   TWRP

Graham observed the drawing room crowded with young people. Since returning from the Great War, he found it difficult to reconcile the London before him with the one he left behind.

A surprising apparition entered the room. Tall and slender, with ivory skin, shining eyes, and cropped ebony hair, the figure’s mannerisms suggested a female. But the clothing was mannish and accessorized with an instrument case and a short riding crop. Graham stared in fascination.

The apparition approached “Have we met before?” asked an evocative voice.

Graham gazed down into dark violet eyes, surrounded by heavy black lashes. The vixen in men’s clothing smiled up at him, caressing his face with the riding crop. Graham stood with his mouth agape.

The vixen unlatched the instrument case and assembled a saxophone. Climbing on top of the nearby piano, she played “The Lady Is Good.” Her body and the instrument were one, writhing and bobbing until both glistened with perspiration. How I wish to be that instrument, thought Graham, writhing himself.

The performance ended and Graham found the vixen again tapping him with her riding crop.

“Now that you have witnessed my talents, allow me to properly introduce myself: Miss Diana Vanderwell, the Tennessee Princess.”  Still holding the saxophone – she threw her arms around him, pressed her body close to his, and kissed him firmly on the lips. Graham’s body responded, to his embarrassment. But Diana merely laughed and prepared to kiss him again.