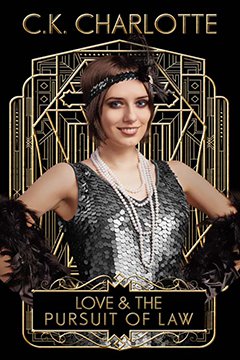 As one of the first women called to the bar in England, she had not had time for frivolity. Actually, she had not even had time to think of it. Ivy sighed, then looked up as a quick knock preceded her father’s entry into the office. Behind him was the most beautiful human being Ivy had ever seen.

Ivy attempted to stand but knocked over her cup of tea, chipping a cup from the bone china set. Liquid spread over her copies of the Mirror. As she bent to blot it, the image of the young man before her stared up from the page.

“May I be of some service, Father?”

“Allow me to introduce myself, mademoiselle,” the young man interrupted. “The Honorable Bryan Henderson.” He executed a court bow. “At your service.”

“Please have a seat,” she managed to offer, gesturing to one of the two leather club chairs facing her desk.

“I prefer to stand. I cannot imagine that this will take any time at all. I have a number of matters to attend to, and I do not intend to discuss my legal concerns with a mere girl.”

While Ivy fought to find civil words, he stood to his full height. Approaching her desk, he bowed, then forcefully grasped her hand and kissed it, brushing his lips against her skin.

Ivy gasped, as the kiss tingled up her arm, caressed her breasts, and wormed into the very interior of her being.